Kevin Durant has been on a tear lately and is looking like the best player in basketball. The latest news? $25,000 has just leaked out of his bank account.

Kevin Durant has never shied away from responding to jeering supporters. Durant usually does this via his Twitter account, but on Friday night, he opted to respond to a fan who was in attendance at the Brooklyn Nets-Atlanta Hawks game.

KD used some… colorful words to put the fan in his place, and it cost him a cool $25,000 for his reaction.

Kevin Durant screams at a heckler in the stands.

Durant returned after a one-game absence on Friday night, leading the Nets to a statement victory against the Hawks on the road. The 11-time All-Star led Brooklyn’s attack with 31 points on 12-of-22 shooting and 1-of-4 from outside the arc in the victory. In the game, he also had six assists, five rebounds, and three steals.

But Durant’s on-court performance wasn’t even the greatest story of the evening.

“Durant, stop weeping!” yelled a Hawks fan as Durant waited for an inbounds pass from James Harden in the midst of the game. The Nets superstar took the inbounds pass, tipped it back to Harden, glanced over to the spectator, and shouted back, “Shut yo ass up, motherf*****,” without missing a beat. As if nothing had occurred, he started to jog down the court.

Unfortunately for Durant, a video of the encounter went viral over the weekend, and the NBA was apparently made aware of it.

Kevin Durant, a forward for the Brooklyn Nets, has been fined $25,000 for using profane language at a fan in Atlanta.

In the NBA, trash language isn’t uncommon. Every night on the court, players swear at each other, and emotions sometimes spill into the fans.

That’s precisely what transpired between Durant and an Atlanta fan on Friday night, and KD is undoubtedly remorseful.

Durant was fined $25,000 by the NBA on Sunday for using obscene words at a supporter. He isn’t the first player this season to perform a prank like that, but he is the first to get caught red-handed. Now he’ll have to pay the price.

To KD’s credit, this isn’t a major setback.

A $25,000 penalties would be a financial disaster for the majority of us. Durant, on the other hand, is not one of them.

According to Celebrity Net Worth, the future Hall of Famer will earn more than $42 million in salary alone this year, bringing his total net worth to $200 million by 2021. He won’t be too upset about the $25,000 punishment since it represents less than 0.0001% of his total value.

Durant has more money than he can spend in his whole life, and no amount of penalties can alter that. 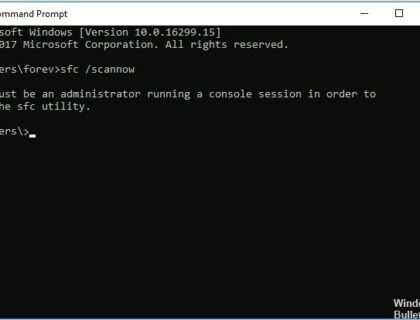 Troubleshooting: ‘You must be an Administrator running a console session in order to use the SFC utility’

How To Change DNS Server on Windows 10: Step by Step